In our times of markets on the move, and tectonic shifts of power in the world, project organization, whether business, development or otherwise, is increasingly confronted with uncertainty. The problem with environmental ambiguity in organization is that there is often not enough information available upfront, inside the building, to determine what needs to be done and how to do it. Most organizations don’t have a solution to deal with this constraint to decision making.

It was once the wish of social engineering to control for uncertainty in the social environment. The premise was that you could make decisions based on a certain desired outcome, and hedge against the risk of it turning out otherwise. But through a couple of decades of iterating on the concept of social engineering we now know that it can only achieve so much. The power to coerce people to choose one type of behavior over another dissipates under change and uncertainty. The framework has shown to be ineffective, or too costly at best, and the social environment has increased in dynamics thereby making it less controllable.

Gone are the days that we could do this….

Adoption requires a sniff of self-evidence
Instead of defining for the world what the menu of choice is and the relative benefits of choice outcomes are, we are arriving to a realization that behavioral change can better be evoked by understanding problems. This understanding can be used to create solutions that are so superior to the existing ones applied, that they would be adopted by free will, or want even. We would for example prefer to give our sick relative a call over the mobile phone to ask if our visit would be appreciated, rather than walking 10 miles to ask the same; one type of behavior and spending time is substituted by another over-convincingly more optimal alternative.

The capacities of humans to design convincing superior solutions is age-old. This was documented succinctly by Adam Smith, with his example of the boy and the steam engine valve.

“In the first fire engines, a boy was constantly employed to open and shut alternatively the communication between the boiler and the cylinder, according as the piston either ascended or descended. One of those boys, who loved to play with his companions observed that, by tying a string from the handle of the valve which opened this communication to another part of the machine, the valve would open and shut without his assistance, and leave him at liberty to divert himself with his play-fellows. One of the greatest improvements that has been upon this machine, since it was first invented, was in this manner of discovery of a boy who wanted to save his own labour”

Immersion and reducing barriers to adoption
I find Smith’a example so intriguing because it is an example of innovation adoption in pure form: a self-invented solution for a self-identified problem. Organization differs from the example above, because it has more distance to the people who own the problems, and are intended to adopt a solution. Organization’s challenge, rather, is to impose a crafted solution to its intended users from at a distance. This demands a conscious act to deal with this constraint of distance.

Immersion is practiced (most often by designers and entrepreneurs) to do just that. Immersion is a project development time allowance for identifying patterns of behavior and capturing unpolluted data, which explain current behavior (also called exploratory user research). Even before you start working on developing a potential solution, you begin with finding focus by asking what would define the problem you are trying to solve.

Immersion is a form of subjective inference: something, which depends entirely on an individual’s perception. However, if patterns check out and tend to repeat themselves in other circumstances, or replicate concisely, then subjective judgment is compounded to a more objective phenomenon, and becomes verifiable by others. It is then, when actionable insight appears, because the pattern has provided an insight and become a structure that organization can use to craft solutions. (just think if you were the first and only person on earth to see a shooting star, and waking up your friend in the middle of the night to watch the sky) 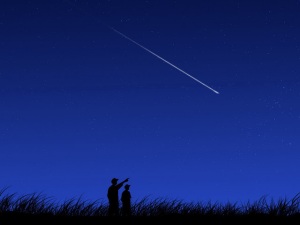 There! You see it?

Organization as it currently is, has an over-disposition to objectivity, and thereby tends to overlook the important value of immersion plainly due to its subjective nature. Immersion is otherworldly for the safe domain of objectivity and verifiable decision making under more certain conditions. It is also abhorred even by knowledge resources that could support organization to improve their function, like science and the mainstream of business or public administration methods.

So rather than searching for new patterns to come to grips with change and uncertainty, organization defaults to existing decision making frameworks, and increased levels of detail in recording and analyzing data to make decisions. But with increased amounts of data and social environment volatility, detail has become such an over-supplied commodity that it’s actually losing its relevance as a basis for decision making. So, it’s not lack of detail that causes ambiguity, but rather the absence actionable insights which have become scarce in circumstances of change.

In conclusion
The purpose of immersion is to discover patterns, which can evolve to a new basis for objective decision making. Immersion can be seen as a mechanism for mitigating the constraint that uncertainty imposes on organizational decision-making. With the pace of change accelerating, the immersion exercise increases in value and in necessity. It will need to be done more widely and frequently to update our current objective decision making frameworks, and prevent them from becoming an obsolete representation of the actual world. The boy who invented the piston-to-lever attachment is spending his time developing the electric car, or training to become a top-class football player, and needs help in getting there. Using immersion to arrive at new insights is gaining market value, and needs to be adopted in project planning to keep the organization relevant to supply the world with solutions that relate to actual, current, problems.

This is the second piece in a continuing series of posts (starting here) on what the role of human-centered design could be in development work. I’m working on this together with Niti Bhan, who will also be posting her observations at her Perspective blog. Posts will be categorized appropriately in the coming time