Nespresso is a machine-and-pod coffee concept for making espresso, developed by the food multinational Nestlé. By fitting an aluminium coffee pod into the machine, perfect espresso can be made at the push of a button. The Nespresso case is a famous example of business model innovation, propagated often by business model protagonists, and with good reason. It is one of the liveliest arguments that the future of competition will not so much be driven by innovation in products or services themselves, but by the activities surrounding the products and services that bring them to market. Specifically, what makes the Nespresso case appealing is that the model: 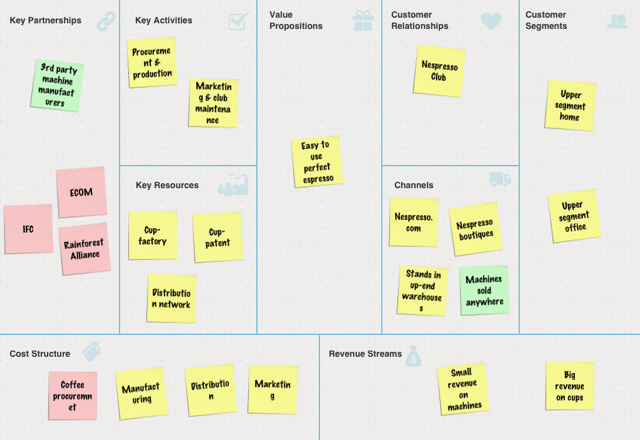 Nespresso’s business model wasn’t built in a day. Since its first patent in 1976, Nespresso fiddled around with the technology for 10 years, before incorporating the company in 1986. The company decided to service the business-to-business market in the 1990’s, in joint venture with a machine manufacturer that also maintained a sales force. This model failed, and almost bankrupted the company. Around 2000 Nespresso innovated in its business model and worked it out to what it currently is: a model which shows a year-on-year growth rate of around 25% (the fastest growing division at Nestlé), and which noted revenues of over Euro 2.4 billion in 2010.

The case is most noted for its downstream business model innovation. In last few years however, interesting things have started to happen upstream as well in the company’s sourcing practices. The company’s bullish growth rates have put pressure on sourcing specialty coffees. Nestlé claims that only 1-2% of coffee produced in the world fits to their quality requirements for Nespresso, and competition for sourcing in this segment is fierce. In order to provide the distinctive coffee quality and aromatic characteristics, farms need to fit to a rare combination of several specific production parameters of soil type, altitude, and vegetation. Scarcity is thus starting to work on the business model, and this has pushed Nespresso to refine its sourcing practice, where closer relations with farmers are key.

The sourcing model is called the Nespresso AAA Sustainable Quality™ Program. Nespresso targets the farmers, or rather clusters of farmers (farmer clubs), that fit to the quality specifications it needs in Brazil, Colombia, Nicaragua, Costa Rica, Guatemala, and India. The program focuses on quality, environmental and social sustainability, and productivity (further details of the program can be found here).

The program is operationalized by a consortium of several distinct partners. The partnership constitutes a business model in itself. This business model (depicted below) involves the following key partners:

Drawn out on another business model canvas, the sourcing model looks like this:

According to Nespresso’s own statements, the program is working out very well. It claims to be able to reach its target of buying 1.3 million bags of coffee (60 kg. per bag) under the AAA program in 2013, corresponding to 80% of Nespresso’s requirement. Also Nespresso states that farmers are paid a price which is 30-40% above prices which are paid for regular quality coffee at the New York Stock Exchange, and 10-15% above prices paid for top quality. Furthermore the company claims to pay over 75% of the export value directly to farmers. As a result 40.000 producers supplied 60% of Nespresso’s coffee in 2010, and in 2013 this number is expected to reach 80.000. An impact assessment report by the IFC has shown that farmers’ club incomes are 27% higher than those from clusters of farmers which are outside of the program in Mexico and Guatemala. A small work-around of the figures shows that procurement of coffee is around 10-20% of the business model’s cost structure. This is very low by food industry standards and a very small price to pay for so much alleged positive impact.

These types of partnership models are increasingly appearing in food and agriculture value chains of late. They are generally a response to pressures on resources and global commodity prices, where downstream companies build closer relations with suppliers in order to secure their production base. Regarding the Nespresso partnership the following observations can be made in SWOT form:

As a whole, the Nespresso case is a very compelling case of business model innovation for both downstream and upstream segments, and holds potential for improving sustainability of the whole value chain. The most important observations for value chain innovation are that:

If you want to learn more about how to design partnerships like Nespresso, check out our trainings options!

The business models were drawn using the Business Model Toolbox iPad app, available on the AppStore.

Design thinking pays off! The British Design Council has issued a study which tracks the performance of companies they consider to belong to the Design Index (longterm application of design principles in product and organizational development on a systemic basis) and Emerging Index (newcomers who partially or a have recently adopted design principles to their products and business). In all, companies which can be labelled in either category seem to be outperforming their competitors, even in the long run. Have a look: 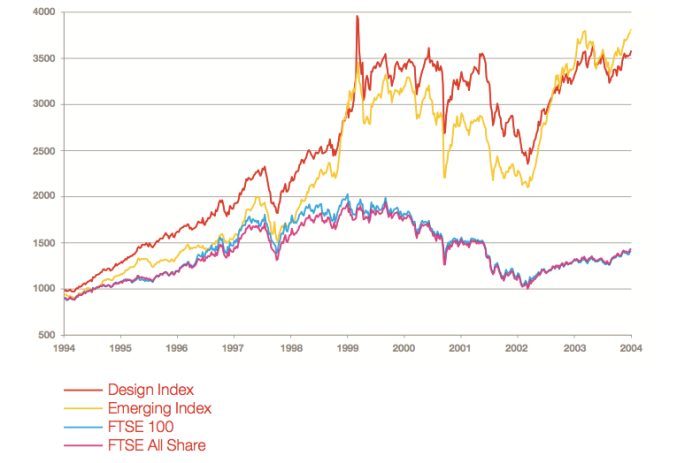 This is a very promising trend. It shows that businesses overly focussing on engineering and technology as drivers for business development will eventually lag in performance. Rather, business that is able to integrate design thinking into operations, using design as a method to guide business strategy, and to shape product, service and process development, ends up discovering new business drivers through superior command of user and market requirements.

This is pretty convincing, but the question is: how does one start thinking about design in business? Stanford Design School provides the scoop:

The figure nicely captures the ” how” using the Venn Diagram principle showing where the design innovation sweet spot is most likely to be found: the place where technological solutions are tailored to society’s wants and needs, and the effect of which is perpetuated through the specialized execution of business. For purposes of illustrating in more detail how design and organization come together, the Design Council has also written up several cases that apply principles of design thinking to their organization.

OK, so now we know the “how” we need to think, what is it we need to do in order to work along the line of business design? A very comprehensive solution is provided by Alexander Osterwalder‘s Business Model Canvas, inventor of the idea that the anatomy of any business reveals a parsimonious constellation of 9 distinct building blocks. Check ’em out:

My personal experience is that the more options are worked out for a single business idea using the canvas, the more discoveries you can make that link the various building blocks together and turn out a smooth business logic flow. In the coming days I will show how this works with a revamp of the “Osterwalder classic” on Nespresso with some insights on the value chain dynamics this model is generating, and the impact it has on sustainability [Post-publication edit: You can find the case here]. By continuously studying and developing business models with the canvas, it reveals harmony in building blocks, aesthetics, and functionality: the promise of a really well designed business idea. Get cracking with yours! It’s worth it!

This work is licensed under a Creative Commons Attribution-ShareAlike 3.0 Unported License. Attribute to valuechaingeneration.com
Join 1,156 other followers